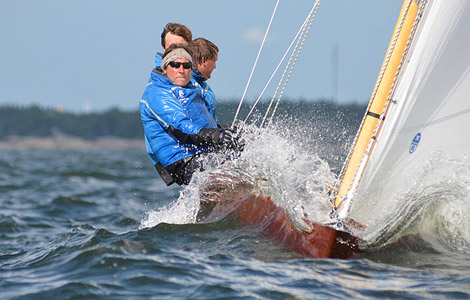 After a rainy night the sailing started at 11h00. The conditions were reasonable for some light wind sailing.

First start for the modern fleet took place at 11h20. Wind was 6 knots from south-west, waves under 1 m. In moderns the windward mark was rounded first by Sophie II SWE 132 followed by May Be XIV SWE 115. Sophie II maintained its lead during the downwind leg until the race was abandoned because of the time limitation. Wind was dropping all the time and when the classics after two restarts were on their first windward leg the wind almost died. Llanoria US 83, the 1952 Olympic gold medalist on these same waters, sailed up the course in the middle and was first to round the top mark followed by Boree IV FIN 70, Elisabeth X NOR 80, Gallant KC 10 and Off Course FIN 60. They also finished the race in same same order.

The second start took place at 14h20 and the wind had increased to 4 m/s. Moderns made one round before classics managed to make a clean start. It was two times black flag for classics and totally 6 boats were disqualified. Llanoria US 83 von this start, second was Sara af Hangö FIN 49 and third Seasta DEN66.

Moderns made their third start as late as 17h05. Junior FRA 177 was the winner of this race with Temptation SUI 104 in second and Sophie II SWE 132 in third place. At the end of the long day both classes had finished three races.

The results after three days and five races are: