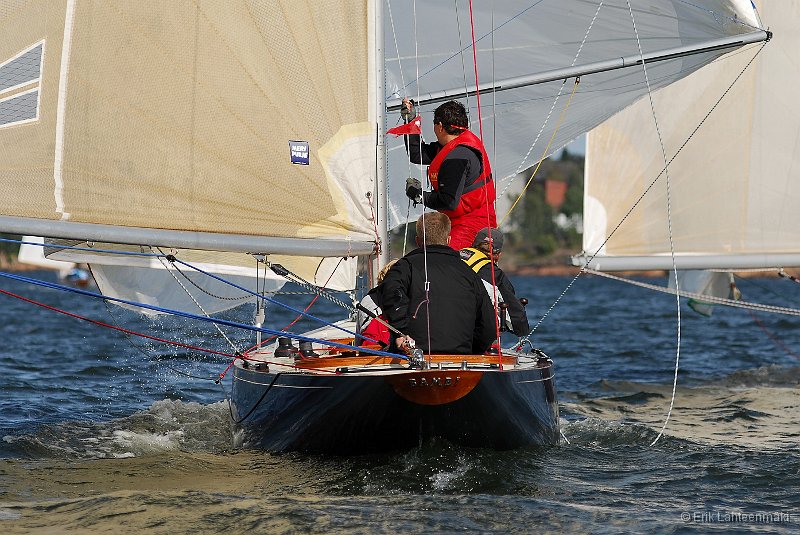 Bambi has a mahogany hull and a plywood deck.

Knud H. Reimers, the designer of Bambi, took over the boat yard of Gustav Estlander in Sweden in the early 1930´s. Reimers is best known for the Tumbler, a one-design sailing boat that was popular in the U.S. His better known six-metre yachts include Silene II (GBR-67), Tara (F-20) and Bambi (Z-34, FIN-66).

He also designed several cruisers (skärgårdskryssare) and motor boats. Bambi was designed for use on lakes with light weather conditions. We are hoping that in the right conditions, she would be even more successful in Finland than she has been in Switzerland.

Bambi was built in 1946 at the Chantier Naval Portier (Meilen) Shipyard in Zurich. She was first registered with the CVSNG club in Geneva. Bambi has a solid racing record on Lake Geneva over several decades and below are some of her regatta results:

Bambi sailed on Lake Geneva until 1981. She has been professionally maintained over the years and was in good condition when bought to Finland in 2002. Bambi underwent a thorough renovation and modernization of her running rig at M-Yachts in Finland, where many racing six-metres are cared for.

Bambi participated in the World Cup in Sweden in 2005 finishing 9th overall with a one 2nd place and taking a 1st in one of the races. She has since sailed in the Finnish ranking races with a solid performance. Bambi finished 2nd in the Qualifiers for the Sinebrychoff Challenge and 4th in the National Class Championships in 2009.

The 6mR fleet experienced a small hangover in 2012 after the World Cup. So did even Bambi, and currently the yacht is for sale. See more information under the "FOR SALE" menu.

Bambi took a sabbatical year in 2013. She did hit the water, but wasn´t able to partcipate in any races.