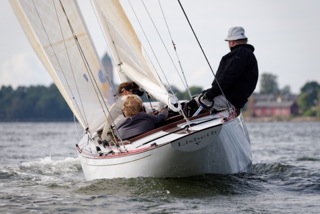 Some history of Lisbeth V

The Six Metre yacht Lisbeth 5, former N46, SWE136 and now FIN 74 was both designed and constructed in Norway in 1932 by Johan Anker. Johan Anker together with Einar With, board member of KNS, and some additional yachtsmen created a Six Metre syndicate, with the aim of developing a Norwegian defender for the 1932 Gold Cup. The new boat N46, design no. 366, was christened Lisbeth 5 in honor of Einar With`s daughter Lisbeth. Lisbeth 5 had been actively raced but remained around Oslo for 68 years when Johan H Larson purchased her in 2000. One year later a complete renovation was embarked upon to ensure her return to international classic Six Metre racing. To ensure the highest standard for her renovation, Peter Norlin, famous worldwide as a designer and sailor for the class, was engaged as technical consultant.The work was performed by a team of very skilled boat builders in Orust on the west coast of Sweden. The final works, launch and measurements were made in 2006/7 at Schelins yard near Stockholm. During the 2007 Lisbeth 5 had further developments on her path towards successful competitive racing in Hamble. During 2008 Lisbeth 5 participated in the European Championships at La Trinité, Brittany, with clear result and speed improvements, ending with a good 7th place
2018 August Lisbeth V, sold to a consortium of 4 and will stay in Finland.

During the season the crew have consisted of the three owners and Robson Linberg, Thomas Hallberg, Jari Bremer, Anton Hentinen and Emil Vartiainen.

The Finnish Championships was tight racing and Lisbeth finished 3rd, an acceptable result in the tough fleet of 23 boats. In SInebrychoff Challenge qualifications Lisbeth finished also 3rd. The last regatta Pro Sailor Classic we finished 2nd.
During the season the crew consisted of the three owners and Robson Lindberg,Thomas Knudsen, Even Jolly, Jari Bremer, Anton Hentinen

In Sinebrychoff Challenge 2nd place in the qualifications.
In the Robbe & Berking World Cup in Flensburg 11th place, with a very good 1st place in the first start.