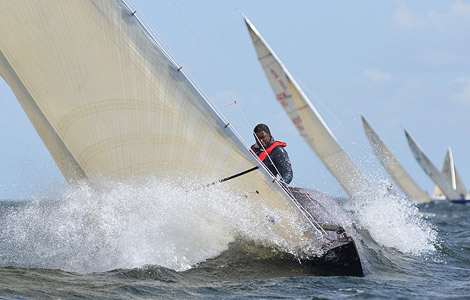 On Tuesday there was again a wind warning up to 25 knots plus a nasty swell from the previous days. Also the more sheltered inner race course does not work too well in southerly winds. Hence another postponement was given to start the second day as well.

Finally, before 11 am the fleet was sent out and the first race started in nearly perfect conditions. A surprisingly strong counter current gave the helmsmen some headache while trying to hold their positions on the start line.

The modern class was under way shortly after 1 pm. At the first rounding the Swedish team of "Sting", skippered by Thomas Lundqvist, was in the lead. Sting was closely followed by the French boat "Junior" and the Swiss "Temptation". The reigning world champion, Sweden´s "Sophie II", skippered by Hugo Stenbeck, managed to overtake the leading trio and took home the first race of the World Cup.

In the classics, Finnish yacht "TOY" started in the middle of the starting line and tacked inshore immediately. The replacement helmsman, Jali Mäkilä, with the experienced crew of TOY found better winds on the right side of the course and built a convincing lead by the first rounding. The TOYboys had no difficulties in holding and even extending their lead, while another Finnish entry, "Fridolin" helmed by Henrik Lundberg took second with a huge margin to the next boat. Canadian entries "Gallant" (reigning world champions) and "Saskia" battled it out for 3rd and 4th with Saskia skippered by Don Martin being stronger at the end. The Finnish champions on "Sara af Hangö" took fifth place.

In Tuesday´s second race the wind picked up a little while some scary looking thunder fronts surrounded the race course. With some luck the race could be sailed in reasonable conditions. A wind shift during the first lap made the second beat more of a speed contest with boats all lining up for the second top mark rounding. This took away all major tactical opportunities for the chasing boats and early leaders could just protect their positions by making no mistakes in their boat handling.

In the modern fleet French "Junior" lead through the race until the finish line. Second was British yacht "Valhalla" while "Sophie II" took third place.

In the Classics a black flag was put up on the second start attempt and two Finnish boats, "May Be IV" and "Bambi" were flagged out of the race. First race winner "TOY" was also too early on the line and had to make an extra loop when the gun went. They could only recover to a modest 18th place from their failed start. 2009 world champions "Gallant" showed great form again and lead pretty much from start to finish. The Finnish runner-up from 2009 World Cup, "Fridolin", took another second and snatched the overall lead in classics after two races. Third was "Sara af Hangö" and fourth another Finnish entry "Ali-Baba II".

Images of the regatta sailpix.fi