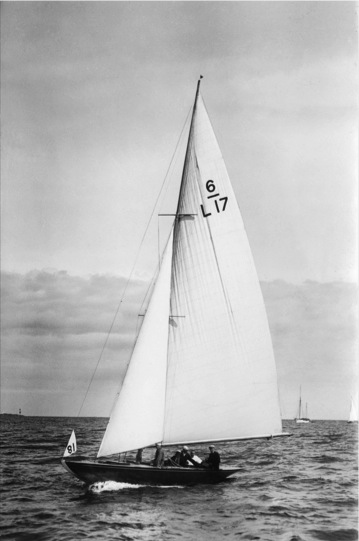 6mR Renata´s (built in 1927) history is a bit different, compared with other successful six metre yachts of the time. Dr. Henrik Ramsay describes in his brilliant sailing memoires, how the yacht got her fine shapes, her name and how she turned out to be a "capricious girl", during her very first season in 1927. The times for great success were just after her rig was converted in 1928.

Ramsay (1886-1951) had already achieved good placings with his former yachts, such as the six metre Svalan, but as a talented sailor, he wanted even better results. He asked the famous architect Gustaf Estlander (1876-1930) to draw the lines for a new six metre yacht. Estlander had already shown that he had the talent to draw the winning forms, even in the six metre class. Ramsay wrote that "of course" the builder of the new yacht would be Arthur Magnus Pettersson from Helsinki. Pettersson had learned to handle the noble wooden materials in his younghood in Kronstadt, Russia, where he had constructed small mahogany dinghies. In the autumn of 1926, Pettersson had first thoughtfully spitted over the drawings, then growling as a mark of approval to the beautiful lines he said "I am certainly able to build as well as the architect can draw".

Renata´s first sailing season in 1927 was good but not brilliant. Her sister yachts, the Swedish Maybe and the Estonian Tutti V, had already proved out to be fast boats. Nevertheless, Ramsay saw potential in his new yacht. During the long winter Ramsay carefully considered the characteristics of Renata. Then, one night he woke up, the solution clearly in his mind: the mast must be moved backwards. Estlander hesitated and was willing to give new plans to Ramsay. But Ramsay was sure about his intuition. Ramsay had the mast moved 30 cm backwards and in 1928 Renata became a dangerous rival in her class. Renata sailed to Sandhamn in July 1928, to participate in the grand regatta. There were gathered the world´s best six metre yachts and skippers, representing 13 countries, to participate in various competitions, including the Gold Cup.

Renata was honored the title of the best six metre yacht of the regatta (K.A. Wallenberg´s prize) and got several other prizes. As Finnish six metres never won the Gold Cup, neither One Ton Cup, Renata´s achievement can be considered one of the best Finnish 6mR yachts ever got, during the "hot decades" of six metres in 1920´s-50´s. Ramsay was by no means a professional sailor, as he had numerous demanding tasks in international commerce, politics and in other organisations (i.e. Finnish and Scandinavian Sailing Federations).

Ramsay competed with Renata until 1933, when his friend and a crew member Julius Horst died. Then Ramsay ordered a new yacht, Arneta, to whom the "lucky-number" of Renata, L 17, was shifted. Renata was in active use until the beginning of 1980´s, after which she has been waiting for a renovation.

Renata will be used as a flagship in a project providing empowering experiences related to sailing and the sea for young people in danger of social exclusion.