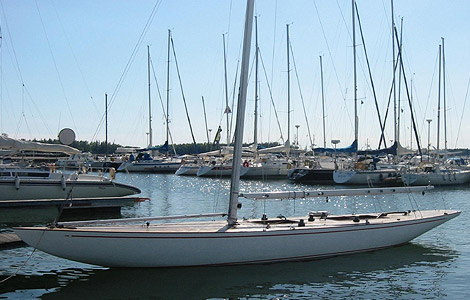 Anja was commissioned by the engineer Helge Nodbäck of NJK Helsinki in 1926 from the designer Einar Olofsson. She was the first sixmetre he designed according to the 1919 rule. He had previously designed the sixmetre Puck in 1914. He was later to design six other sixes (Anja, Arneta, Anitra, Antinea, Maj-Lis and Elinore). Along Zake Westin he was the most productive sixmetre designer in Finland during the 20's and 30`s. She was built in Helsinki by the designer in a "shed in the harbour" at Havshamnen.

In 1926 she participated in races in Helsinki without great success. Oddly enough she was still selected to represent Nyländska Jaktklubben in the race for the prestigious "Sportklubbens pokal" trophy races. Somewhat surprisingly she took home the trophy with two straight wins with the constructor at the helm. After this it was time for the annual Sandhamn regatta in Sweden. Anja was the only one of the twelve Finnish sixes to win a race that year. The same autumn she won the HSS autumn race in Helsinki.

In 1927 she took part in the Finish Sailing week in Helsinki with 18 sixes. She got of to a god start but the final score was 4-7-14-DNF. In NJK's annual regatta she finished fourth.
In 1927 and 1928 she was part of NJK's team that won the Neptunipokalen trophy. Other races in 1928 and 1929 resulted in midfield placings.

In 1930 Helmer Nodbäck sold her to the designers brother Oskar Olofsson in Mariehamn in the Åland islands. The new owner was not interested in racing and used her for pleasurable tours in the beautiful archipelago. Frej Liewendahl managed to race her a few times in 1932 with good results, among others she won the famous American six "Vineta".

In 1946 she was sold to Palmer Ekbom and Karl Kåhre of ÅSS, Mariehamn, who where more interested in racing. She took part in many races in the so-called respite-classes with different boats. These results have not survived to this day due to the destruction of ÅSS archives.

During the war the sixmetre Hej-Hej constructed by Wahl was evacuated to Åland and raced with Anja. By being in Åland the both were allowed to keep their lead keels.

In 1950 Anja was bought by the journalist Bror Sundblom of ÅSS, Mariehamn. She was in poor shape and her new owner sent her to Åbo for a complete overhaul. This is when she recieved bunks, a pentry and a small cabin.

In 1959 Bror Kangas of MSF, Mariehamn became the new owner. He was an active racer and Anja participated in many races at Mariehamn, both against other sixes and in Scandicap and respite classes.

In the 1980's she raced actively in the fleet of sixes at Mariehamn. Her prime rivals where Jolanda III, Puckie, Toy and Fridolin. She had some difficulty in keeping up on the downwind legs as she lacked a spinnaker and a modern rig.

In 1988 she took part in the Nordic Championships in Åland with mediocre results.
In the winter of 1988 she got a new teak deck and she was boards were glued tight. She received a newer mast from her friend and rival Fridolin, who got a modern aluminium one.

After the death of her owner in the 1990's the grandson Bo Eriksson took care of the boat and she was moved to Stockholm, Sweden although she remained a Finnish registered yacht.
In the nineties she was sailed as a family boat in the Stockholm and Åland archipelagos
In 1997 she was left on shore at Grödinge boatclub south of Stockholm and would stay ashore until 1999.