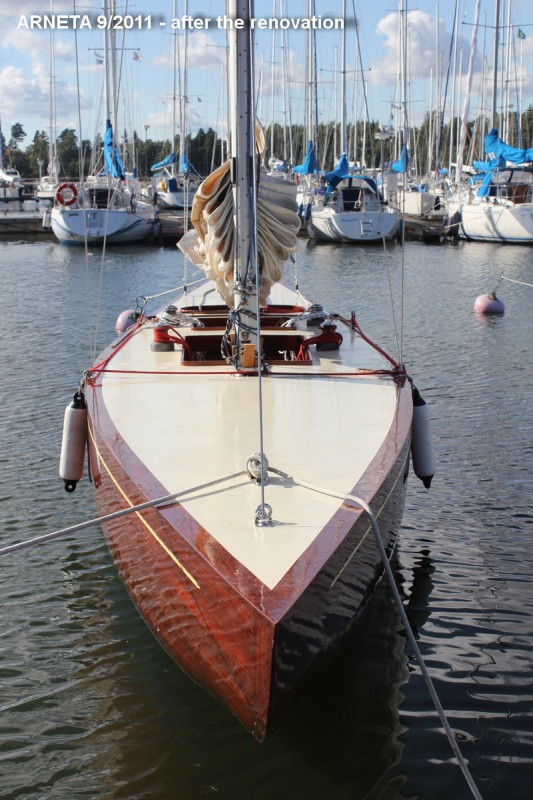 PRESENT NEWS
Arneta is currently up for sale. She has been sailing as a racing family yacht for the last 20 years, since 2016 with only occasional entries in the Finnish ranking series.

HISTORY
"In my life of sailing the 6 meters have, my own yacht as well as others, provided me a lot of pleasure. Sharp racing on excellent courses, joyful sailing in the archipelago as well as refreshing turns outside Helsinki" This is how Henrik Ramsay1) (1886-1951) recapitulates his sailing with Sixes in his book "Sommar och Segel"2) published in 1945. The book is considered to be one of the most important books reflecting the early 20th century sailing in Finland and the author Ramsay is considered to be one of the most influential persons in the Finnish sailing society during that time.

Ramsay owned four Sixes. In 1916 at the age of 30 he bought Finn II when the value of first rule yachts was low. In 1924 he commissioned his second yacht L 10 Svalan and in 1927 his third yacht L 6 Renata, which was to become one of the most renowned yachts in the Finnish six meter class.

In 1930´s Finnish 6 meter sailing was on the up and up. The recession of the 1920´s was only a memory and new yachts were leaving the yards in a steady stream. In 1934 Ramsay participated in the Gold Cup with the yacht L 35 Elinore designed by his old friend and designer Einar Olofsson 3). After the races he was a bit concerned about the yacht being too overgrown both in size and in weight. Elinore was more than 12 meter long, and still today she is the longest six meter yacht in the world.

Bearing this in mind he commissioned Einar Olofsson to make drawings for a new yacht with more reasonable lines. The yacht was set to be ready for the prestigious Helsinki yacht club Nyländska Jaktklubben´s 75th anniversary in 1936. The intention was also to put the yacht on display in the Finnish pavilion in the Paris World´s Fair in 1937 (Expo Internationale des Arts et des Techniques dans la vie Moderne).

The yacht was built at Åbo Båtvarf in grand bassam mahogany on ash frames during the winter 1935-1936. It was the peak season for Finnish Sixes, 4 yachts were under construction and on the 24th May 1936 the yacht arrived to Nyländska Jaktklubben´s harbour at Blekholmen, Helsinki. The yacht was given the name Arneta and to quote Ramsay "the principle, which I try to use, is that a yacht should have a 3-syllabe female name, which ends with an a´. The female name corresponds to the yachts entire being, the three short syllables, preferably with an r´ as a consonant, gives the impression of speed, and the last vowel is well heard when called". However, another anecdote tells that Ramsay wanted to save the brass letters from his previous yacht Renata.

In 1936 when the news reached Finland that the US Six Indian Scout had won the Gold Cup, Ramsay immediately started to prepare a Finnish campaign with Arneta for the 1937 Gold cup at Long Island. Despite having won many of the national qualification races he was not entirely happy with the performance of the yacht. In the meantime the Finnish yacht Inga-Lill XXVI showed strong performance when sailing in Sweden and the choise was easy - Inga-Lill was equipped with Arneta´s sails and equipment and shipped to US for the Gold Cup challenge.

In 1938 Ramsay´s duties within the Finnish government increased and as a result he cut back on sailing. Arneta was sold to western Finland and in 1943 she was ruffed and continued to sail as a cruising yacht. This was a post war destiny that she shared with many other Finnish Sixes. In 1950´s she was actively cruised in the Finnish archipelago by the owner Thenström who kept her for 20 years. In the 1960´s she was one of the few remaining Sixes in Finland. In August 1969 Arneta and four other Sixes met at a rendez-vous in Helsinki resulting in the founding of FINSMA, the Finnish Six Meter Association.

In 1977 her 7th owner Henrik Sundström was racing her in the yearly Hanko Regatta when the misfortune was there. On the windward leg running on barboard tack she bearly got ahead of L 3 Irma who with her sharp bow digged into the hull some 1,5 meters from the aft. Arneta started to leak heavily as she headed for the shore but five to rescue she disappeared into the blue. Luckily, the top of the mast was left visible and she was lifted up and repaired 4).

In the 1980´s and 90´s she continued to cruise with occasional entries on the race course. In 2001 I was Big Game hunting for Sixes and Arneta was one of 3 yachts locally up for sale. I found her hull to be in good condition regardless numerous visible repairs from almost every decade.

In 2009 her weight was 3.990 kg compared to an original measured weight of 4.200 kg. This recalled for a closer examination of her original measurement certificate and yes, in small letters there was stated that she originally was to carry a 200 kg ballast in 11 lead ingots of which 8 was placed fore the mast.
In 2011 a close to complete renovation of the yacht was carried out at Suomenlinna Boatyard comprising more than 1.400 hours of work.
Arneta was undergoing a major renovation at Suomenlinna Boatyard. The renovation included new keelwood, planking, frames, rudder and new deck. In 2021 the stern keelwood and part of planking was also replaced.

Footnotes
1) More information about Henrik Ramsay (1886 - 1952) can be found in the article "Helmsman: Henrik Ramsay" published by Kyösti Helin and Valentin Autret in ISMA News 2009
2) " Sommar och Segel"; Henrik Ramsay; Shildts Bokförlag 1945
3) Einar Olofson designed 6 Six meter yachts and his history and the boats are described in the book "Sexornas Jakt" i
4) On page 36 in "The Six Metre - 100 Years of Racing" the lifting operation of Arneta is pictured