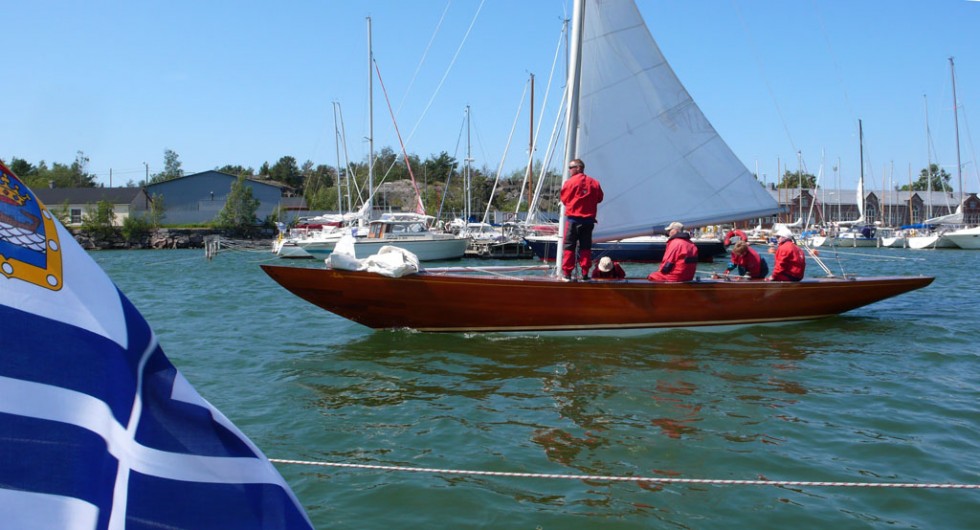 In 1933 the International Rule achieved the final basic form in which we know it today. The maximum mast height was fixed, spinnakers were allowed to be sheeted outside the forestay and the whole concept of measuring the hull was rethought. This alteration of the rules made longer waterline and higher freeboard possible. As well was the ballast keel allowed to be located lower than before. The 6mR boats constructed according to this revised set of rules were considerable larger than their predecessors.

The designer Einar Olofsson wanted to experiment with the extreme limits of the new rule with Elinore. Consequently the boat's length exceeded twelve meters. When drawing up Elinore's frame Olofsson followed the lore of German boat design. Because of this, Elinore and her younger sister-boat Arneta have a striking resemblance to a boat called Sleipnir II, which was constructed for the German navy by Abeking & Rasmussen. As Olofsson was a sea captain by education and valued seaworthiness, Elinore received a high and valiant bow with which she glided through the waves.

FINE WOODWORK
When building a Six Metre boat all the materials have to be of only the best quality. Planks of mahogany were without prolongations, the bent frames were constructed from elm and the boat was full of beautiful bronze reinforcements and mountings. Grooves on the sheer plank were finished with pure leaf gold.

WEALTHY SHIP OWNER
Also, the person who constructed Elinore was a professional seafarer, ship owner Gustav Thordén. In the twenties he departed from Sweden to Finland with no money in his pockets. He prospered, made a fortune in Finland and travelled back to Sweden in the final days of the World War II. As an sailor Thordén was more like a patron than a race sailor. In the thirties Thordén had altogether three actively competing six-meter class racing boats; Elinore, Pepita and Anitra, though seldom was he seen as a
helmsman on any of these boats.

After the Second World War Elinore was transformed into a cruising boat in Sweden,
as Six Metre yachts didn't compete regularly after the Helsinki Olympic Games. Its slender shape and good sailing characteristics made it an
ideal vessel in the narrow channels of the Uddevalla archipelago. As the interest towards classic racing boats revived in the late eighties a group of Finnish wooden boat enthusiasts brought Elinore back to Finland and restored her back into a racing boat. From 1993 she has been raced actively in the Finnish yachting events.

RACING
Althought the summer 2000 was a bit quiet in Finland as so many boats regained their strenght after the effort of arranging the 1999 World Championships, Elinore participated all the domestic regattas and achieved the 7th position in the Finnish ranking list.