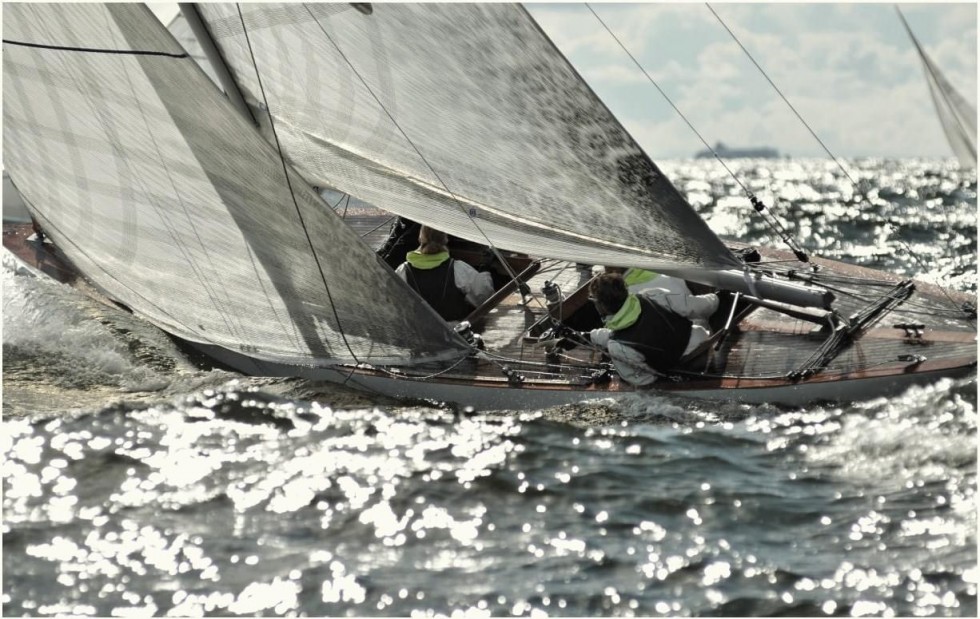 Fandango was ordered by Holger Sumelius in the 1930s and the original thought was that the Holger would sail with Fandango in the Olympics in Kiel in 1936. The yacht was however delayed and never made it to the Olympics and was finally set to sea in 1937. Fandango was owned by Holger Sumelius over thirty years and the yacht participated in regattas only the first three years. In the sixties Sumelius sold the boat to his step-son Johan Avellan. During those times Fandango was rebuilt to a cruiser and it was attached with a dockhouse and big side windows.

Heimo Iivonen bought Fandango in 1984. In summer 1984 the new and old 6mR-owner sailed the yacht from Emäsalo to Helsinki. During the journey Fandango started to leak heavily, sails were changed to smaller ones to avoid bigger heeling, but the yacht managed to reach Suomenlinna safely without problems. After few days Heimo and his son Veli-Matti lifted Fandango on the SuPs-boatyard in Suomenlinna. Leaking mahogany plank joints were repaired with waterproof two component adhesive and plastic tape, after tapes being dried, they were painted with antifouling.

The Iivonen family sailed and actively participated in regattas with Fandango during almost 3 decades and in February 2011 Fandango returned "home" to its original owner when Susanne Ramberg, daughter of Johan Avellan, with family became the new owners. The Avellan family had done holiday sailing trips with Fandango from the 1950s to the 1970s every summer which means that Susanne had together with father, Johan Avellan, mother and two sisters during her childhood and teenage years sailed with Fandango for 25 summers. Fandango participated and the World Championships in 2011 arranged by NJK in Helsinki and during 2011 to 2014 the yacht actively participated in class regattas.

During 2015-2019 Fandango has been seen only sporadically on the racing course as and in 2020 the yacht was transferred to Saltsjöbaden in Sweden which has now become its new home and is actively taking part in regattas again under the NJK flag.