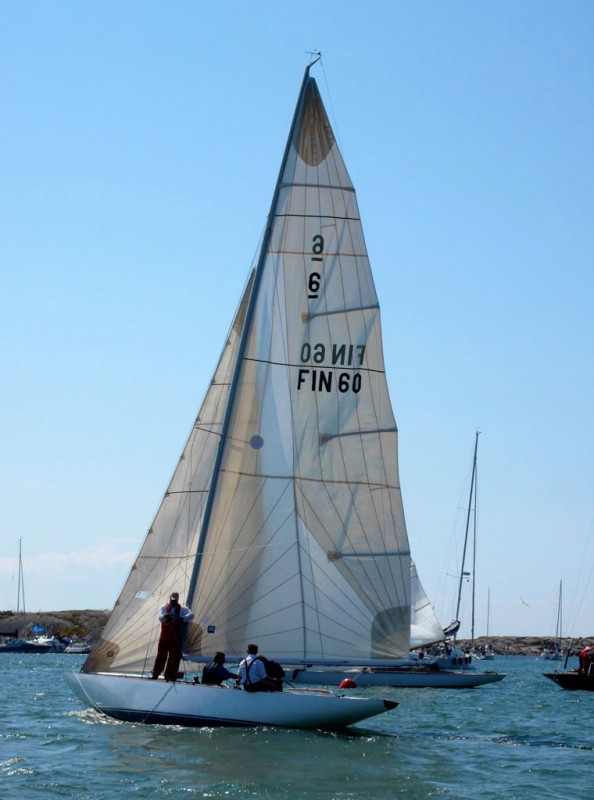 Off Course was built 1939-40 by Harry Becker for the X-Syndicate in Gothenburg. Becker was more known for his radical yachts in the Swedish Square Meter Class. He was the undisputed champion in designing 22 sqm yachts. Even his Six Metres were known for their slim and slender lines. Becker constructed three Sixes but all of them are acive today. Off Course is a relatively heavy yacht (4,3 tons), she has one of the largest sail areas, and a large J-measure. The difference between the girths is large and the keel is exceptionally narrow.

Originally named Bissen, the yacht was built at a time when the standard in the Six Metre Class in Sweden was high. The first season was not exceptionally successful, so she was sold already the following year to Kjell Grauers in Stockholm. Grauers raced in several competitions during the Second World War. The following owner roofed the yacht and held her as a cruising yacht to 1960?s.

One of the legendary "mascots" of the Six Metre fleet in Helsinki was Lauri "Igge" Sederholm. He was an original member of the syndicate buying Off Course to Finland in 1989. To Sederholm the Six Metre was everything in his life and this also led to a tragic accident in 1994. The memory of Lauri Sederholm was held at the Kronbergsfjärdsregatta 1994 and honored by "The Saloon Masters Trophy" donated to Brandö Yacht Club.

Åke Burman gave the yacht a new plywood and cloth deck, but he kept the original roof. The roof was removed 1980 when Anders Hedman rebuilt the deck with plywood below and teak above. He also replaced mahogany planking close to keel with mahogany plywood moduling. The old wooden mast was also replaced with aluminum.

In 1989 Off Course was bought to Finland. The two original members in the syndicate are Kaj "Kaitsu" Karumaa and Pekka Barck, later joined by Erkki "Eki" Karumaa. The aim has been that the yacht should be better each year.

Most of the work has been done 1996 and 1999, when the yacht was at the M-Yachts wharf in Lovisa. Mostly lead by the boatbuilders Martin Rosenstedt and Sune Carlsson, Off Course has had:
- the 10 lowest planks on each side of the yacht replaced
- the hull oiled from outside
- a new keelplank, rudderbow and half of the forebow replaced
- 30 wooden frames and 12 steelframes replaced
- a new rudder and a new steel mast step
- a new mast, boom and winch table to the mast
- a new Oregon pine / mahogany deck
- planks replaced when the deck was rebuilt
- lots of sails from Meripurje

After the World Championships in Hanko 1999 Off Course got a new oregon pine deck and also the two top planks of the freeboard were renewed. Work was made by Martin Rosenstedt at M-Yachts, Lovisa. The new clean and simple layout design of the new deck by Kaj Karumaa, made it possible to race the yacht with 4 experienced strong men.

For the season 2004 Off Course got a new rig after breaking it at the Nordic Championships in Mariehamn the previous season.

RECENT HISTORY
Since Off Course has been brought to Finland it has been one of the most successful Six Metres. It has always been a dangerous competitor, earlier especially in high winds. During the years 2000-2009 when Meripurje's Tom Lindström was sailing as mainsail trimmer, many new sails were developed and Off Course got successful also in light winds.