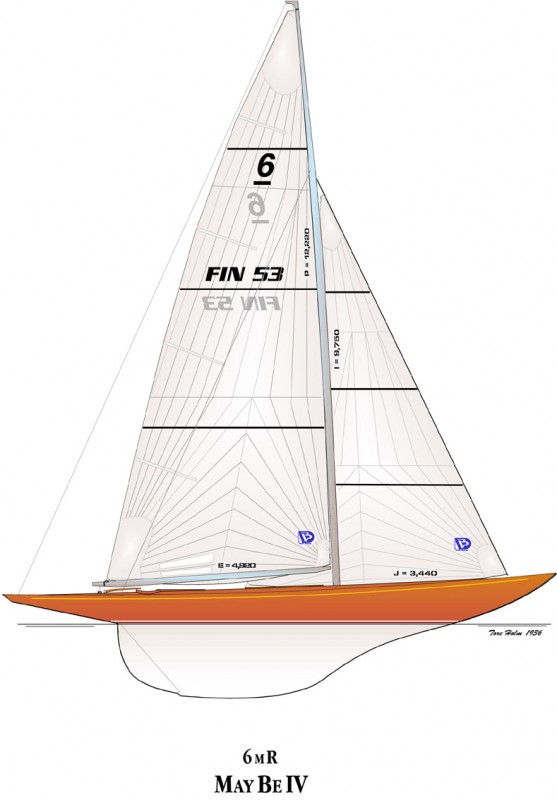 OWNERS OF MAY BE IV

In her first summer Sven Salén´s May Be IV represented Sweden in the Olympic games at Kiel. She got a bronze medal in a regatta with much drama and international pre war tension. She raced for seven more summers in Swedish waters before being converted to a cruiser for the next 28 years.

In the early 1970s May Be IV was one of the first pre-war sixes being put back to racing condition. The hull was in good shape, now she got a new deck, rig, hardware and sails. She raced the next 12 years in Swedish waters very successfully, being the best classic boat in the 1977 World Cup in Marstrand and winning the KSSS 150 year Regatta in 1980.

In 1984 a syndicate headed by Tapio Lehtinen bought her to Finland. For the last 14 years the yacht has been both raced and cruised actively. An open six metre is the perfect vessel for cruising in the sheltered waters of the Finnish archipelago. Her latest achievements include 1st in the Europeans 1984 and 3rd in 1998, and 2nd in the World Cup 1995.

The history of the yacht was documented in a booklet published in 1996 to honour the 60 year anniversary of May Be IV.

May Be´s lines are typical of Holm´s sixes of the 1930s with elegant sheerline and long, well proportioned overhangs. She is longer and narrower than her sisters designed by Holm later in the 40s and 50s. She is said to have been designed as a heavy weather boat but has always been a good all round performer.

In the beginning of the nineties May Be IV was thoroughly renovated with ten lowest planks changed and most of the frames repaired. Everything in the hull was built as close to the original as possible with oregon planking on oak and ash frames attached with silicone bronze screws, the steel frames and floors being repaired and hot dipped as originally etc. Above the deck everything is modern to make tough racing possible, a Proctor rig with Navtec rods, Harken hardware, WB sails of dyneema and dacron, spectra for running rigging.